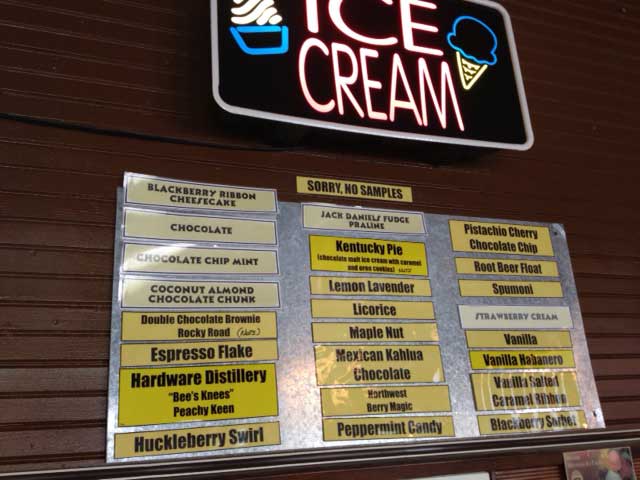 We cannot sell our Bee’s Knees® for its intended purpose until we get label approval from the Federal Government. The approval process for Bee’s Knees® has taken on a life of its own.

In the meantime, Susan and her husband Randy, who own the Hoodsport Coffee Co., asked Olympic Mountain Ice Cream to make an ice cream from our spirits.

Our Bee’s Knees® Peachy Keen was the obvious choice for ice cream. It has the flavors of peaches and honey, with a lot of spirit. The result is delicious.

I have heard that some of the local early risers in Hoodsport enjoy a spoonful in their coffee.

If you are in Hoodsport, stop by the Hoodsport Coffee Co. It is a favorite hang-out for locals, and it has great coffee by Zoka, and ice cream that can be enjoyed at all times of the day. 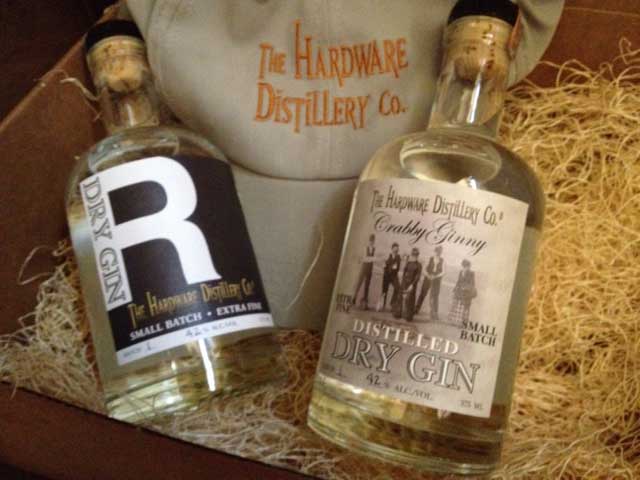 It felt good to open our doors and sell our products this past Memorial Day Weekend. For the time being, our products are limited to two gins, Crabby Ginny and R Gin, which can be frustrating for those who stop by to see us and do not like gin. Those customers who like gin leave satisfied.

Our fingers are crossed for TTB approval of our Bee’s Knees® and our Vodka. We check our email and our post office box everyday, with our fingers crossed.

We are planning our Grand Opening for the weekend after Labor Day Holiday. We should have lots of different products, and fun things to do.

These amazing bubbles were sighted in our fermenter. We are so inexperienced that we do not know if we should be proud of them or frightened. 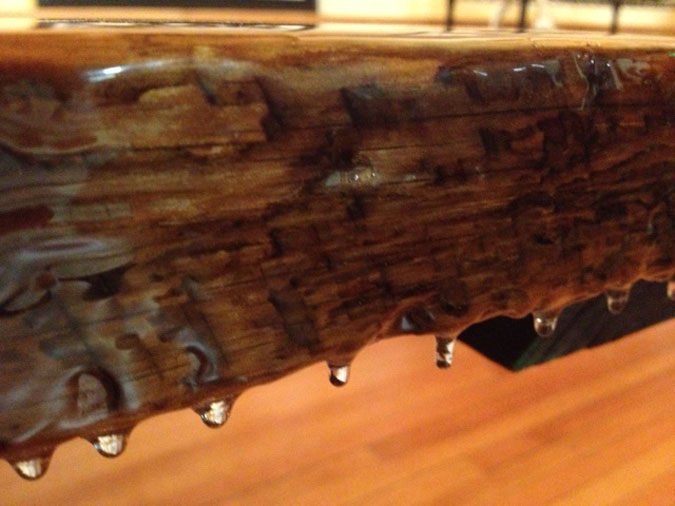 It’s the Bee’s Knees®…and it’s not

Bee’s Knees® is our unique product made from honey and fruit, all from Washington State.

It is in a category of its own, and is considered a “specialty” by our government (the Tax and Trade Bureau, or the TTB), as it does not fall into the usual TTB categories, such as brandy.

As usual, things have been both easier and more difficult than expected for our Bee’s Knees®.

Making our Bee’s Knees® has been easier than expected in that every batch has been successful, but the fermentation time of the honey has taken three times longer than expected. So, we have far less of it than we had thought we would.

The labels have not been easy. We started the label process in December, and still do not have our labels. Our formula has been approved, and as we wait for a decision on our latest attempt at meeting all of the font and style requirements, we are hopeful that we have seen the last rejection from the TTB.

We have made Bee’s Knees® from raspberries, peaches, plums, and pie cherries. Some of the batches of peaches and plums are aging in new American oak barrels, and should be ready by mid-summer. In the meantime, un-aged Bee’s Knees® will be available as samples in our tasting room over the Memorial Day weekend, but we cannot sell bottles until we have approval of our labels. And all of that comes down to the right font in the right place. Something I had never imagined would be so difficult. 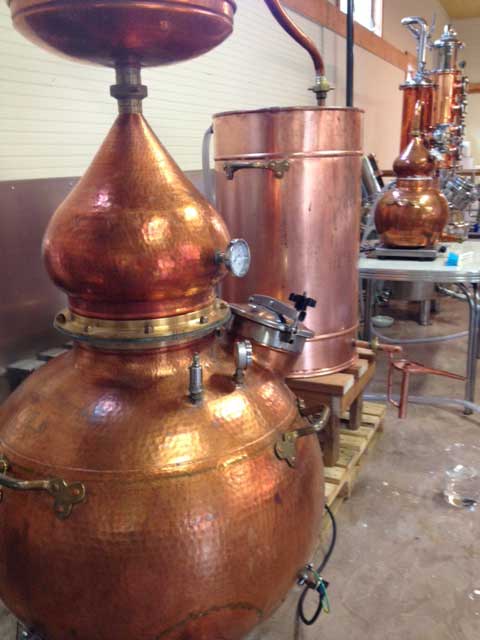 We’ve been working toward this day for a long time, and finally it’s here! Our tasting room opens on Friday, May 24.

Thereafter, our regular hours will be noon to 6 p.m. on Fridays, Saturdays, and Sundays. 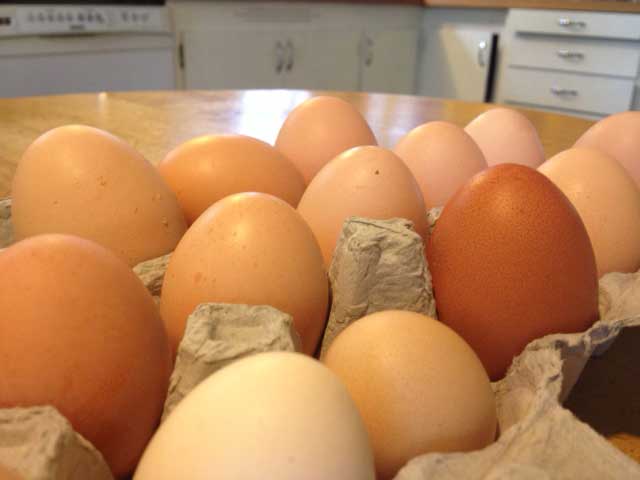 Hunter Farms is a local farm near our distillery.

They sell fresh eggs, delicious ice cream, and have fall and winter events for families.

Last weekend they collected our spent grain to feed their chickens and other livestock. As I write this, I am pretty certain that those happy chickens are dining on single malt barley.

Hunter Farms eggs are beautiful, and the whites of those eggs will be used in our whiskey sours. 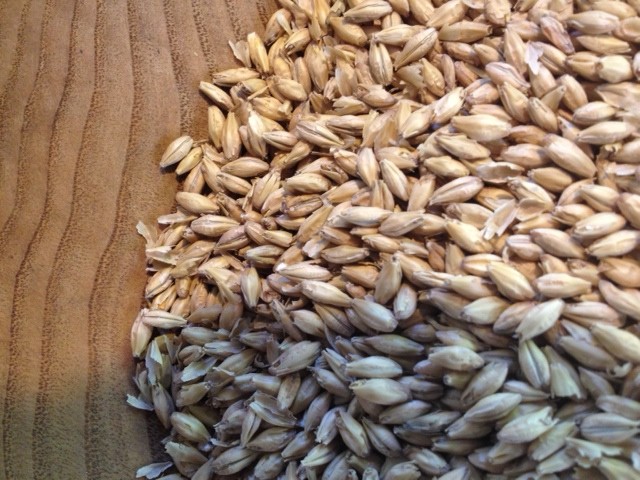 A Few Problems with Our Slow Moving Wort

Wort (also known as beer) is used to make grain-based spirits such as whiskey, gin, and vodka.

To make wort, one must first grind the grain, and then cook it in a mash-tun. After that, it goes to the fermenter, until it is ready to be distilled.

These first steps are the brewer’s job. On the surface, this sounds simple enough, but, trust me, it is not easy, and brew masters are expected to make a much better beer than a distiller.

So far, in my few weeks of experience, I would say that brewing is more difficult than distilling. Time may change my view. These are some of our experiences with beer so far.

We bought a good grist mill to grind our grain. Unfortunately, we wired it incorrectly and the rollers were going the wrong direction. Instead of grinding the grain, the grist mill was flinging the grain all over the distillery.

When we got the grist mill rollers moving in the right direction, we initially ground the grain too fine, and the grain plugged up the mash tun, plus we had misunderstood how to put the mash tun together. As a result, the process of moving the wort from the mash tun to the fermenter became a very slow process. It took 8 hours, instead of 45 minutes.

In addition to the slow moving wort, we had some problems with the chiller, which the wort was supposed to pass through on its journey from the mash tun to the fermenter, which was now a very slow journey. Something happened, and cold water flooded the distillery. Our plan to use the chiller was abandoned for this first batch. This turned out to be okay, as the wort was moving so slowly that it had plenty of time to cool itself, plus it gave us plenty of time to clean up the flying grain. It is a miracle that we had any wort on our first attempt, but we prevailed. It was, sadly, a small amount of wort, and it was very late when we finished. 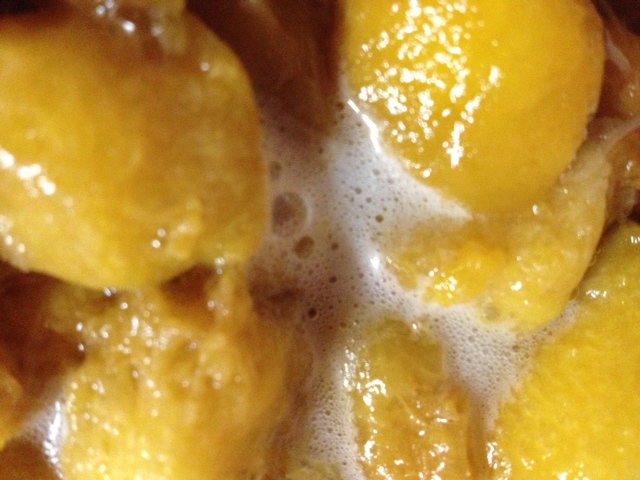 Yeast and babies enjoy the same things. Mostly, they like to be warm, cozy and well-fed.

This past weekend I continued work on our peach honey mead. The mixture of warmed peaches and honey told me when they were ready for the yeast. It just looked right: warm and comforting with lots of sugar. I knew the yeast would be happy, ready to begin its new life. It reminded me of the days when my children were babies.

We bought honey from a beekeeper in Snohomish County and made a peach honey mead from last summer’s late harvest peaches. We pitched the first yeast early in the day and a second yeast in the afternoon. By nightfall it was smelling fragrant.

When we left the distillery we were greeted by the moon.